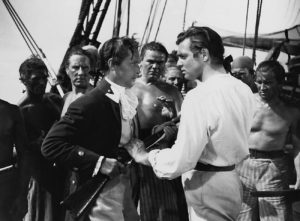 Mutiny on the Bounty or in the studio…

Now not long ago, I posted a thought attacking the glorifying of pirates. And now I learn that today is the anniversary of the Mutiny on the Bounty. While not an act of piracy, mutiny is another nautical event that can occur metaphorically inside the music studio.

Mutiny on the Bounty: Captain Bligh… not the nicest guy?

Several film adaptations of the story regarding the Bounty have been made over the years, and historians have disagreed over time as to whether or not Captain Bligh was a cruel tyrant who deserved being cast off of his command or not. So too, there has been debate as to whether or not the acting Lieutenant Fletcher Christian who seized command was justified. But there is little disagreement how, in the end, it was a miserable affair for all concerned.

Mutiny on the Bounty or mutiny in the studio…comparisons.

Now while one might argue that making music is not near so serious as captaining and piloting a 90 foot long 230 ton armed full rigged ship with a crew of 45 across the oceans, but one would be wrong… bah hah. But indeed making music is VERY serious to the one who wrote it, and generally very serious to those involved in bringing it to life in a studio. As a singer songwriter there must be a bit of the captain in me when I take a song into a studio, and yet some of the best work on my songs comes out because of the producer, and/or due to the talent of someone totally unexpected. Conversely, if I am a butt-wipe with a bad attitude any one of those people who have something brilliant to contribute might simply “mutiny” by withholding their idea or by simply packing up their instrument and telling me to piss off.

In a recording studio the price for mutiny is not hanging, and the stakes may not be life and death, but for the unborn song or the song taken to partial term, the results may indeed be the same as those of the poor Bounty and her crew; loss of the ship, division and suffering of the crew, casting aside of the merchandise so carefully gathered and stored before the disagreement exploded, and other sad losses are still a shame.

Most common symptoms that will lead to the Mutiny on the bounty scenario.

Any mutiny, be it aboard a ship, or in a music studio is ultimately a fatal disease whose symptoms of bad communication, inappropriate loyalty and inappropriate leadership in concert, and poorly handled anxiety have been ignored one moment too long.

“Dancing With The Wind” is the perfect backdrop to listen to while at work and wasting time looking up the Mutiny on the Bounty story on the internet instead of doing your real job. Just sayin…