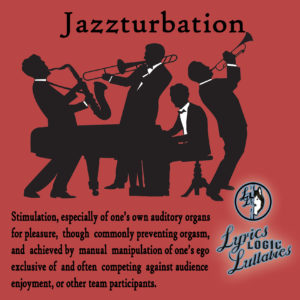 Jazzturbation is a neologism that has seen use a time or two, usually to describe ego trips gone wild amongst small jazz groups or improvisations that wander too far off the reservation of what even erudite ears can digest. Generally, I use the word to describe when a player either spews an improvisational solo that exhausts even a PHD in music theory’s patience, or when he befuddles fellow players to the point where a song ceases to function and he becomes essentially self-indulgent prick whacking off on his instrument until he has descended into the black hole of ego run amok.

More than a few of my favorite recording artists from the tail end of the era where such were produced by major record labels (though mentored and tutored at first) they wound up falling away from their devoted fan base after their first 2 or 3 major albums. And sadly, some were called away by runaway jazzturbation.

Sometimes they would be gobbled up by the lure of doing live performances and the thrill of audience energy exchange. So instead of recording new material, they simply kept doing live shows to rack up the millions for future alimony and child support while pretending to stay younger than they were. Sometimes they would be seduced by the medusa of becoming TV or Movie character actors and forget to “dance with them that brung ya”.

But to me the most annoying culprit of the recording artist death and disappearing act was the lure of jazzturbation. Sure, there is a glorious outcome if a songwriter wants to improve his craft on his instrument – sure even becoming a virtuoso can add dimension and depth to future melody and/or time spent drilling down into new words and syntax can improve lyrics, etc. But if you take your instrumental prowess beyond a point of no return, or take syntax to a point where no one can understand your meaning, then what is the point?

If you become so gifted on the piano that you develop genuine “independence” of the hands such that you can play “Happy Birthday” on the left hand in Db while playing “Amazing Grace” backwards in E major in the right, and then you waste time during a concert showing your audience the vomitous sound of that pairing while neglecting to play your former Platinum Record best selling audience favorite you wrote when you were 20 and not even sure of what time signature it was in until you thought about it… what good comes of it? Nothing….. you my friend are jazzturbating.

Now like its cousin, perhaps jazzturbation may indeed have its place in the grand scheme of things. Perhaps it can relieve stress or release tension. Perhaps it can lead to better command of personal control and/or discipline. But like rehearsal time, jazzturbation (and its cousin), out of respect for other people’s time, should be done in privacy.