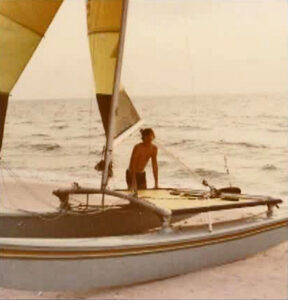 My wife and I went to the beach for a half day yesterday, and on the one hand it was a beautiful time, while on another front it was a sad thing for me.

As we walked the beach on this crystal-clear afternoon, we both were remembering times with our children in decades past. I was reaching back even further in my mind to the 1970s when I was a teenager who enjoyed the beach before so many things that now fill up the time for most people there now. She and I recalled watching our children play in the sand, build sandcastles, or sit in a lounger in the shade and read a book (an actual book with pages). I recalled being a boy and seeing a dozen or more Sunfish sailboats up and down the beach, near to shore, and their larger coastal cruising sailing yacht cousins 5-10 miles out making their passage between island inlets. On most any sunny day with wind, the Belleair Beach sailboat activity was ever present, and on lighter sea days, early in the mornings it was often we would see water skiers plowing up and down the beach.

As a boy, I remember walking up and down the beach with clumps of old cottages separated by many empty lots; these covered with Australian pines and packed full of sandspur grasses beneath. Kites being flown was also common back then, and small planes pulling banner ads up and down the beach were fun to watch. Before the freezes of the late 70s, wild parakeets flew the island in flocks, and few people had portable radios to drown out the noise of those birds. Most houses didn’t have central A/C and instead had functional windows with screens.

Yesterday was a day for my wife and me to compare our memories against the present and feel some lament for so many things lost. Teenagers walking the beach now have earphones in and are looking down at their phones as they saunter past (deaf to the hiss of the waves and oblivious to the cries of seagulls). A few motorboats are making way, bashing their noisy paths through the small chop of waves, but no sails, little or big, are out there. Two wave runners are growling away out there doing a dirt bike on the water dance, but there are no water skiers. Every now and again as we walk, we pass some young adults gathered around portable umbrellas, lounging in folding chairs while staring at their phones. Blessedly most of their “music” is via earbuds, but sometimes one party or other of them may be playing something on a portable speaker; I can’t call it music, but they probably would. Every old vacant lot has been built upon, with houses more and more alike; square lines and well-trimmed landscaping with the pines and the parakeets all but forgotten. The oddity of seeing a pool at a beach house is more and more common.

I don’t mean to lament getting old or draw attention to this man’s version of a description of a generation gap. I try not to judge young people’s obliterating a rare beauty, nor do I forget how the generations before me would likely have begrudged my watching TV at the beach on rainy days, and the “crap” I listened to on AM radio when I was a kid. But there is a sad passing of the gavel kind of feeling for me and my wife as we walk the beach now. For us it is still stunning and worthwhile when we can get there. Yet there is a sadness in it as well.

I try not to worry too much about what it will all be like in another 20 years. I tell myself, there is enough here right now to fret over so let tomorrow’s drama find its way in its own proper time. But I do sometimes miss the beach I remember from my youth.