It is worth starting with how for me each song has its own story, both in inspiration and also in how the process of crafting it may have worked through me. Some songs come in a flash almost complete with melody and lyrics already dancing together in harmony; some arrive with snippets and starts and stops, full of interruptions and backfires; some remain melodies without a lyric for years until a lyric one day leaps unto it in my mind for some reason beyond my really knowing exactly why. Less frequently a small lyrical line attacks my attention with perhaps a hint of cadence, and then I try to fill in the missing pieces of melody and lyric over time. 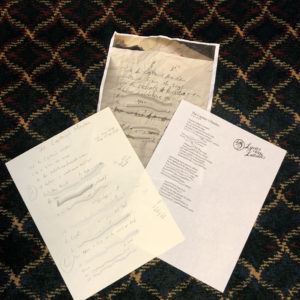 When melodies come first, I can generally weave lyrics unto them once I’m inspired in that direction. And mating lyrics to an already existing melody can almost feel easier to me than trying to do the reverse. If the lyrics are first it is for me the harder method. But several of my past songs were crafted in that way. But I generally dislike bending a melody to fit a lyric for there is so much structure in a good chord properly anticipated and accentuated musically. Somehow to me it seems as though bending a phrase or altering a word with a synonymous turn of lyric upsets the art of a song less than monkeying around with a melody.

Part of the reason I mention all of this now is how I’m currently embroiled in struggling with a song concept that began with a lyrical idea which I fleshed out in way too much of a hurry such that I now face the daunting task of finding the melody inside it. Ahhh, such is the joy of the work inside it all.